Why not to spend a beautiful day in the mountains? Especially if this day is quiet and sunny; especially if you are on the Dominica Island.

So, I decided to climb to the summit of the most beautiful mountain in Dominica â€“ Morne Trois Pitons. This mount is Dominicaâ€™s second highest peak and one of the most spectacular mountain trails in the Caribbean.

Of course, this is not a trip that should be taken alone. Usually a group of several people is formed and they are guided by a person who is familiar to these places. Our guide was Jerome, a pleasant man about sixty, a resident of the island. To get to the starting point of our trip was not difficult at all. Buses that pass Pont Casse are usually in route to Castle Bruce, Marigot or La Plaine. West Bridge in Roseau is a place to catch buses in this direction.

At last, I was on the place and our trip began. First, the path was very wide and that gave us a lot of optimism. As Jerome promised us, the first fifteen minutes we easily walked through the forest. Jerome told us about all those trees we passed: Richeria grandis, miconia mirabilis, Symphonia globuliferaâ€¦ Then the path narrowed and our journey became more difficult: we faced short rock scrambles and wooden steps.The next forty-five minutes gave us steep steps, another scramble up and more and more steps. Only after an hour of our journey we began to spot the first sighs of the summit. It was worth doing it: we were granted with magnificent views of the whole island. The panorama included Dominicaâ€™s highest peak Monte Diablotin, the Layou valley, the southern edge of the Central Forest Reserve. The views were really fantastiÑ!

All in all it took us two whole hours and a half to reach the summit. It was not that easy! During ascending, we enjoyed beautiful sceneries of rainforests and the mountains of Morne Couronne and Morne Negres Marrons. In spite of the fact that our guide warned us beforehand that it would not be an easy trip, it was sometimes very difficult. The major part of the trail was clear and easy to follow. However there also were places where you had to climb up rocks, avoid branches and tree routes. Besides, the wet places were very slippery. But everyone felt that the job was done not in vain. We managed to climb a mount 4,550 ft high! We reached the summit and broke out a picnic to celebrate our ascent. The pleasant aroma of herbs and the fresh light breeze strengthened our hunger. And only then our guide Jerome told us that eighty percent of the tourists do not reach the summit and prefer to stay on the slopes. You cannot imagine how proud we were of ourselves! This mountain hike is considered one of the finest in the Caribbean. This trip was really great, it was magnificent! Not only was it much fun, but it cost every effort we put.

This trip gave me more than just several hours of climbing and the picturesque views. The moment you step on the summit and see all that beauty of the island spread out in front of us, you understand that there are much more things in the world worth living for. Do you agree? 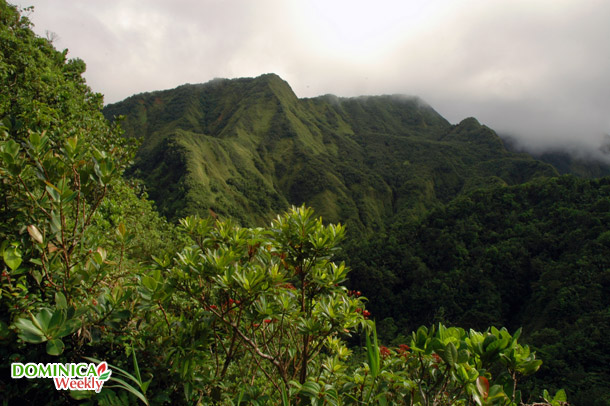 The park is also known for its diverse flora with endemic species of vascular plants, its volcanoes, rivers and waterfalls, illustrating ongoing geo-morphological processes with high scenic value.

It was also the first of the islandsâ€™ National Parks to be legally established, in July of 1975, by an act of parliament.The Park is 13.4 km long by an average of 5 km across and covers the southern end of the mountain backbone of the island.

Morne Trois Pitons National Park was named after its highest point – a 1,437m volcanic stub, includes large tracts of the most extensive undisturbed tropical forest in the Lesser Antilles and the headwaters of most of the major streams and rivers of southern part of Dominica. Its range of five volcanoes contains a rare combination of precipitous slopes and deeply incised valleys, the richest biodiversity in the Lesser Antilles with freshwater lakes, 50 fumaroles, hot springs, a boiling lake, and spectacular scenery. Other outstanding features of the site include the Emerald Pool fed by the Middleham Falls, Stinking Hole, a lava tube in the middle of the forest; The Boiling Lake, a 200-foot-wide flooded fumarole with grey-blue water that bubbles; Titou Gorge, a small waterfall located in a water-filled Gorge near the boiling lake, and the Freshwater and Boeri Lakes, separated by Morne Macaque. Morne Trois Pitons National Park is by no doubt, one the most highly scenic tracts of undisturbed tropical forest in the Lesser Antilles. Its no wonder Tourist numbers are increasing every year. Approximately 10,000-15,000 visitors a year walk to the Emerald Pool, and another 2000 make the 6 km hike to the Boiling Lake from Laudat village. Come explore Dominica’s Morne Trois Pitons National Park, and you will discover a number of ancient trails or footpaths, cross the Park roughly east-west between mountains or north-south along ridges. Some of which were used in the recent past before roads to the east were completed in 1960 for access to Roseau and by hunters. Now used for sightseeing such as to the Valley of Desolation, for trekking, cycling and riding. Canyoning and much more.

It looks like visitors will have to pay more to access a number of Dominicaâ€™s attractions effective July 1, 2008. A quick note: The trails to Morne Diablotin and Morne Trois Pitons are now added to user fees sites.

According to visitdominica blog the changes are:

Change in Ferry Schedules for Dominica

Steve over at Visit-dominica blog is also reporting a change in Lâ€™Express des iles Ferry service into Dominica from the period July 11 to August 31, 2008 on Tuesdays and Thursdays. Please note that if youâ€™re traveling too and from Dominica using the ferry, that the ferry service will ONLY be running from Cabrits Portsmouth and NOT from Roseau.

Schedule is as follows:

In the recently 2008-2009 budget brought great news for all those interested in setup alternative energy businesses in Dominica. To encourage the use of alternative forms of energy on the island, the government has announced with immediate effect the removed all duties on equipment to be used in self-generation of energy. This yearâ€™s Dive Fest at the Anchorage Hotel is so far is living up to all the hype, when the Ministry of Tourism decided to take part in the â€˜Discover Scuba Divingâ€™ and luckily the guys (Izzy and steve) from divefestdominica.com were right on the scene to capture the Minister’s (Amateur) plunge.