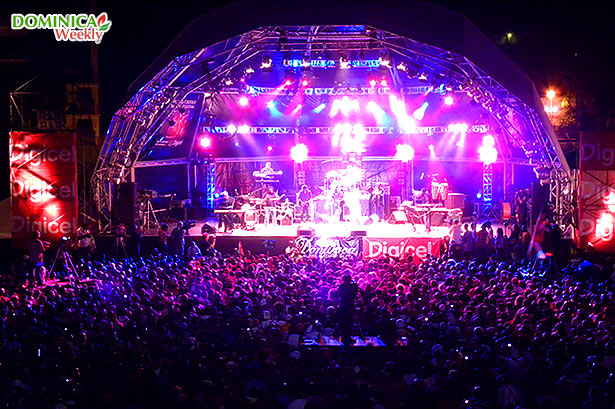 The World Creole Music Festival (WCMF)was conceived out of a need to provide a stage for Dominican Musician and musical expressions, and to increase Dominica’s visibility overseas.

Held during the last weekend in October, and now in it’s thirteenth year, the 3-night festival has grown to one of the only truly indigenous music event in Dominica and the Eastern Caribbean.

The creole festival has attracted some of the most renowned musical groups and soloists from the creole-speaking world. Groups such as Ti-Vice, First Serenade, Zouk Machine, Magnum Band, Zin, Taxi Creole, Kassav, Tabou Combo, Exile One, Gramacks/New Generation, WCK, Carimi among others as well as solo artists like Sakis, Ophelia, Tania St. Valle, and Franky Vincent have thrilled festival audiences over the years.

And this year the WCMF was no different; we at Dominica-weekly had the opportunity to checkout night two of the thirteen World Creole Music Festival – which featured bands like Morgan Heritage – who put on a phenomenal performance, Sweet Mickey, Caribbean Vibes, Triple Kay band, and Dlux Band.

Here are some highlight moments, and a short video from night-two of the 13th Annual Creole Music Festival.

P.S. Just maybe…if we can get some help from the Dominica Festivals Commission we will be able to cover all three nights of the festival next year.