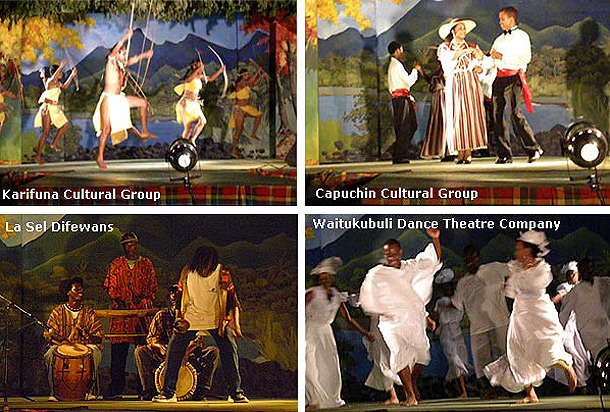 September 26th, 2009 marked the official opening of the celebrations of the 31st anniversary of its independence in Dominica.

Under the theme of â€œProgress and Development,â€ Prime Minister Roosevelt Skerrit and Minister for Community Development, Culture, Gender Affairs and Information, Loreen Bannis-Roberts, addressed the crowd gathered at the Old Mill Cultural Center to participate in the opening ceremony.

Here is a short video of Dominica’s Independence Celebrations 2009: Official Opening Ceremony – We hope you enjoy it!

Has The Agricultural Sector Foster Economic Growth in Dominica? In the recently national budget address Prime Minister Skerrit highlighted the agricultural sector and how it offers a means to foster economic growth. He continued to underscore the many ventures of the government within this sector.

The Dominica Labour Party (DLP) administration over the years has invested heavily in fishing, horticulture, livestock, fruit and vegetables among many other areas in the agricultural sector.

An agreement was recently concluded with the government of Japan for the construction of a fisheries complex in Portsmouth costing approximately US$7.5.

PM Skerrit believes that efforts within the agriculture sector have resulted in significant economic growth. But there are still some people who thinks that there should be more incentives for farmers and fishermen in the sector in other for agriculture to have any significant impact on the Dominican economy.

What about you? Do you think agriculture sector have resulted in significant economic growth in Dominica?

Face the Fact: Universal Secondary Education is not Working

Editor’s note:This article was published in the Editorial section of the Chronicle Newspaper on July 31st, 2009.

Prime Minister Roosevelt Skerrit and other proponents of the controversial Universal Secondary Education (USE) system continue to use deceptive rhetoric to sell the ailing project as a success and refuse to face the fact that it is not working and needs to be fixed or abandoned.

In an interview broadcast during the inaugural international cricket match at the Windsor Park Stadium, PM Skerrit spoke of his expertise and experience as an educator as well as his training in psychology. As the interview unfolded, he mentioned USE as one of his pet projects but maybe his thoughts were more focused on psychology than education at the time.

Indeed, there seems to be perverse psychology at play behind the response of the USEâ€™s advocates to mounting skepticism about the project. It is manifested in a three-pronged approach consisting of rehashing the good intentions of USE, glossing over its failures and implying that critics callously want to keep down â€œpoor peopleâ€™s childrenâ€ who fail primary school.

It is a cunning play to stir up peopleâ€™s raw emotions and hope this clouds their better judgment. But in the long term, it will not work. Those who feel it know it. Teachers, parents and students who are feeling the crushing effects of USEâ€™s flaws cannot help acquiring the distressing knowledge that the system is crumbling around their ears.

No one questions the good intentions of the USE but critics question its effectiveness and practicality. No one expects a complex system like USE to work flawlessly from the inception but no one expects it to be retained if glaring fatal flaws make it unusable and damaging. Furthermore, no one wants to deny any child a secondary education. However, those who fail primary school cannot be dumped â€˜en masseâ€™ on secondary schools without dire consequences.

Some advocates of USE point to its success in other countries without regard for the peculiarities of its nature and implementation in Dominica. In nations where USE is working, the learning curve for children who are being brought up to speed is not as long and as steep as it is here. The stark reality is that the gap in knowledge between those who are ready for secondary education and those who are not is monumental, not marginal, requiring massive remedial work that is simply too taxing for teachers and students.